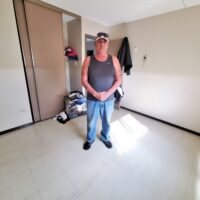 A Brandon man says his life is in limbo after plans to move closer to family in Winnipeg ended in him fleeing his Manitoba Housing apartment that was infested with cockroaches and bed bugs. Victor Bouvette, 68, is now living out of bags after returning to his original Manitoba Housing unit in Lawson Lodge on Eighth Street in Brandon. In the meantime, he’s attempting to salvage the furniture and household items he left in Winnipeg, but was told he has until Friday to remove his belongings, or […]