As striking members of Starbucks Workers United (SBWU) explained while on the picket line, Red Cup Day is “like Starbucks’ Black Friday.” All over the world the promotion draws a larger-than-average number of customers for the red cup giveaway.

But this year SBWU called a “Red Cup Rebellion” by holding one-day simultaneous strikes at over 110 stores on Nov. 17. These Unfair Labor Practice strikes called attention to Starbucks’ union busting, its refusal to negotiate at over 250 unionized stores and the company’s 900+ alleged violations of federal labor law.

Of the seven stores targeted by Boston SBWU for strike actions on #RedCupRebellion Day, six were locked down tight by barista pickets before 5 a.m. The only red cups served at those locations were outside, embossed with union logos. 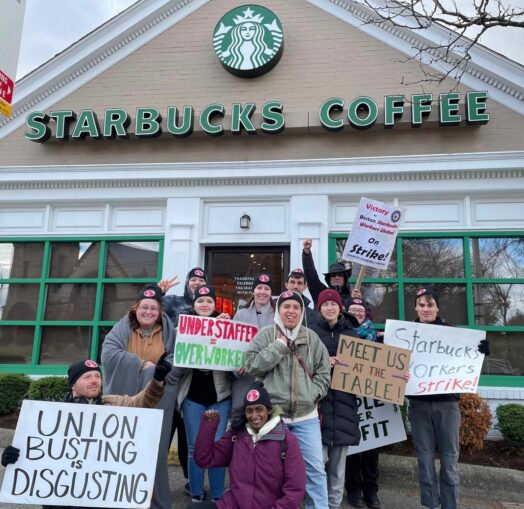 Starbucks bosses tried to break the strike at the remaining store at 75 Mount Auburn St. in Watertown, Massachusetts, which the workers report is the most profitable store in the region. Using managers from other struck stores exclusively to run the shop, the district manager repeatedly called the cops on the handful of workers — some with years of seniority at the location — who were talking with their regular customers at the door.

As the sun was coming up, with mobile and pickup orders causing a jam in the parking lot, customers lined up at the door. Boston SBWU immediately began organizing flying squadrons to reinforce the Watertown lines. By 10 a.m., supporters and strikers from stores at 874 Commonwealth Ave., Coolidge Corner and Cleveland Circle had formed a picket line spanning the entire property entrance, successfully emptying the parking lot through customer solidarity turnarounds. By 11 a.m. managers threw in the scabby towel and dumped dozens of uncollected orders down the drain after locking the doors.

Multiple stores were hit with strikes in the New York City area. Workers at the fancy tourist trap known as the Roastery in Manhattan have been on strike for a month over health and safety conditions — specifically mold in the ice machine and bedbugs in the workers’ break area. Starbucks has yet to agree to meet with the workers and has offered nothing in writing to demonstrate any action in response to worker issues.

While not all of the 100 or so workers at the Roastery have joined the strike, it has had an effect on the store’s bottom line, with hours of operation shortened since the strike began. A popular strike chant is the usual “What’s disgusting? Union busting” followed by: “What’s appalling? Contract stalling!”

Workers at four unionized Starbucks locations in Philadelphia participated in the Red Cup Rebellion. The strike affected stores at Broad and Spring Garden and 20th and Market in Center City, 22nd and South in South Philadelphia, and 34th and Walnut in West Philadelphia. Huge, inflatable Scabby the Rat made an appearance at one store. 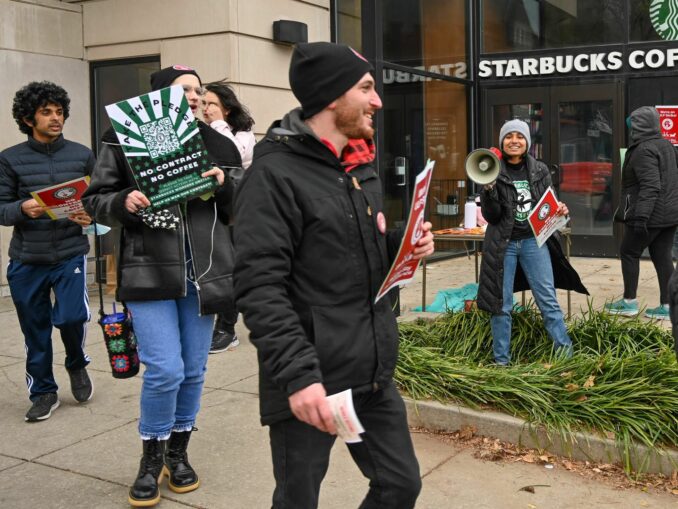 The 34th and Walnut store is in the heart of the University of Pennsylvania campus. Workers there held a spirited picket line in front of the store. Chants included, “Vente, mocha, grande, double, union busters you got trouble!”

In Buffalo, New York — where the coffee chain union drive began just over a year ago — four Starbucks stores went on strike. The Elmwood Avenue and Genessee Street stores were shut down the whole day. Management, preying on new hires who weren’t informed of the strike or the history of Starbucks’ union busting, forced other struck stores to open. But even at those stores, the picket lines remained strong throughout the day. Another Scabby the Rat joined the Elmwood Avenue picket line in the afternoon. 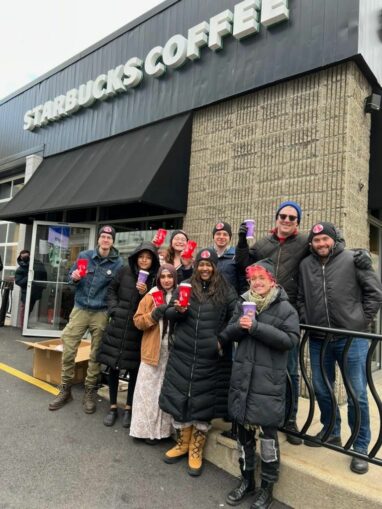 Two of the five unionized stores in Greater Cleveland joined the one-day strike, including the Lee and Mayfield store in Cleveland Heights. Workers and supporters kept up a picket line from 5 a.m. to 7:30 p.m. They explained to news reporters that Starbucks management had walked out of their first negotiating session and had since refused to meet with the union. “We want to cut into their profit line,” one striker said. 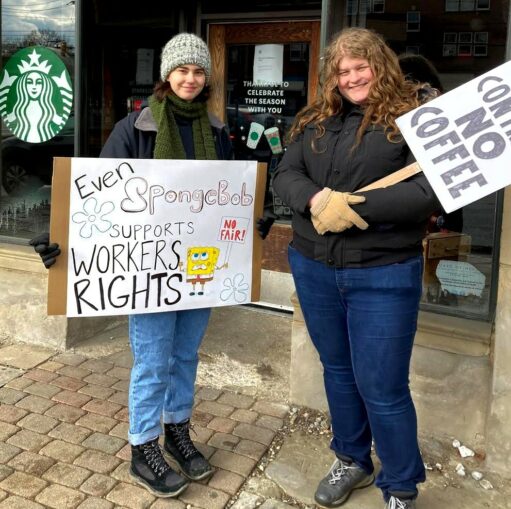 Knowing that no baristas — who voted 100% for the union — were going to cross the line, management closed the store for the day. Would-be customers honked, put thumbs up and wished the strikers good luck.

The original Seattle Starbucks store at 5th and Pike was busy; but once SBWU showed up, the customers cleared out fast. All the Pike Street store workers were striking and picketing, so the store was only kept open by two managers and a district manager.

Supporters joined the picket line as the loud demonstration attracted a lot of attention and was covered by at least two television stations. Starbucks workers struck at two other Seattle stores, as well as at stores in Bellingham, Everett and Tumwater, Washington.

Starbucks organizer Thomas Estling, who works at one of the three stores in Portland, Oregon, that went on strike, spoke highly of his union. “The way we plan is really open and democratic. . . . We can react really quickly. One of our partners was fired, and within a day we had a rally.” He stressed that, unlike some unions controlled by distant representatives, SBWU is truly worker-led. “The reps do very little; we’ve taken over it all.” 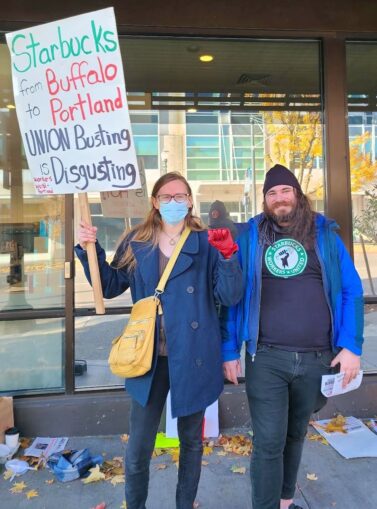 Estling also praised Starbucks workers in Eugene, Oregon, saying that they’re “very militant. One of their workers got fired and they shut down all seven stores for a week.”